I'm a bit behind with blog posts due to the pressures of work; how life changes!

Here is a report of a trip to Klosters for the Eagle Ski club jounal:

After a poor start to the Alpine skiing season the snow came just in time for Klosters Week 2 with John Hogg. The group gathered at the excellent Silvapina Hotel in Klosetrs Dorf on the Saturday night. It was snowing heavily outside and conditions looked favourable for deep powder. John gave us a run-down on safety and distributed ABS avalanche safety packs. The disadvantage of these packs is that they are fairly heavy and don’t have a much capacity but a few avalanche related anecdotes from John convinced us they were a good idea.

Day 1
It was still snowing hard in the morning. Options we limited due to the category 4 avalanche rating. We took the cable car up to Gotschngrat at 2285M. Visibility was poor due to mist and snow but the snow was excellent; deep and light. John went for a head plant early on when he caught a buried fence post. Both skis disappeared and we spent some time digging them out. We continued down towards Scwarzzeealp through rolling meadows and steeper trees to eventually cross the railway and the bus back up to Davos Dorf. In the afternoon we skied the Dorfberg; more very deep powder but by 14.30pm everything had closed due to the storm. 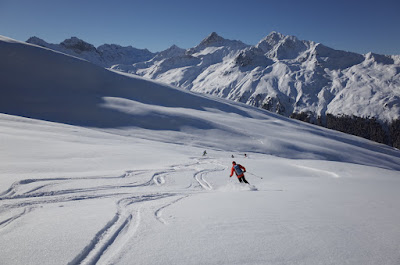 Day 2
Another cat 4-avalanche day. We skied the Mierhoffer Tälli in deep powder down to Wolfgang. In the afternoon we took the Parsennbahn to the Weissflujoch and skied a superb long run, on and off piste, ending up in Serneus several kilometres down the valley from Klosters; tax back. 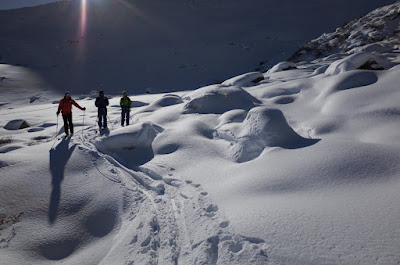 Day 3
The avalanche hazard lowered to cat-3. More fantastic snow between the perfectly groomed pistes of the Madrisa followed by yet another big, long run down from the Gotschnagrat to Culfia. 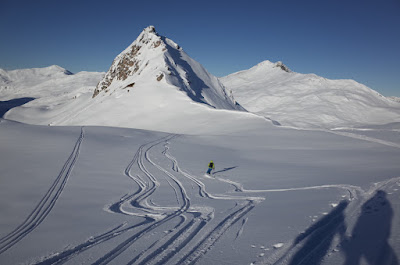 Day 4
Light snow and -10’C at 2285m. We skied the Hoch Route and then down to Bad Seneus. In the afternoon the terrain was confusing and difficult to keep track of where we had been and where we were going next! The skiing was amazing yet again; perfect powder finishing up with a long run down to Küblis. We took the train back up the valley to Klosters 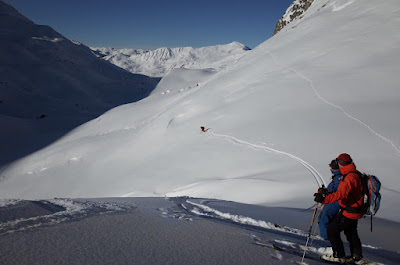 A change of scenery on the opposite side of the valley. From the top of the Jakobshorn we skinned SE over easy terrain to a point where we could descend down to the Tallifugga. The scenery was jaw dropping but the snow turned to breakable crust lower down which severally tested our skills after 4 days of perfect powder. 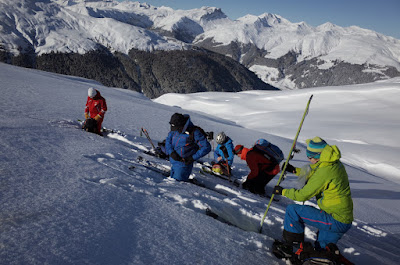 Day 6
Definitely the best day. Perfect weather and great snow. From Weissflujoch we skied down past the small but shapely, Seehorn. Forty minutes of skinning brought us on to the shoulder of the Dreimaschenspitze. Skins off for a very long run down through boulders, meadows and forest to Küblis.