Skied from Cairngorm car park over to Lurchers Gully and along to Ben Macdui. Back via the plateau and Cairngorm summit. Weather on the change.
Carn Toul and Braeriach from Ben Macdui
Posted by Andy Hyslop at 9:53 am No comments: Links to this post

A disapointing day. Despite a sunny forecast the cloud barely lifted above the tops making skiing difficult in flat light and navigation uncertain.

I had planned to ski a big loop around Moine Mhor but bailed at Mullach Clach a Bhlair. I didn't fancy launching off into the snowy wilderness in the prevailing conditions. The descent down into Glen Feshie was quite nice once I had negotiated the snow flutings.

View Mullach Clach a Bhlair in a larger map
Posted by Andy Hyslop at 6:21 pm No comments: Links to this post

Traversed the Glen Feshie Sgoran Ridge starting at Achlean and finishing at Loch an Eilein.
Snow and skiing conditions are good on the plateau but varied on the ridges. Some areas are scoured to hard pack while areas of compacted flutings make travel difficult in places. There are dangerous slab avalanche conditions on many west facing slopes.
Looking down the Loch Einich from the summit of Sgor Gaoith 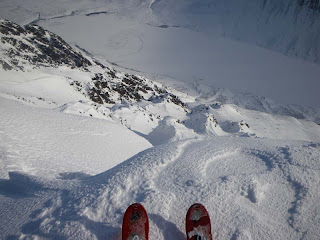 View Sgorans Traverse in a larger map
Posted by Andy Hyslop at 8:08 pm No comments: Links to this post

Bumped into Sandy Allan at the top of Aonach Mor. He was climbing I was skiing. It was one of those encounters where you come across someone whom you’ve never actual met before, but feels like you've known them for years.

We chewed the fat in the Nevis Range Café and reminisced about times gone by and the characters of the climbing world back in the 70s and 80s.

The weather was amazing again. No wind and full on sun. 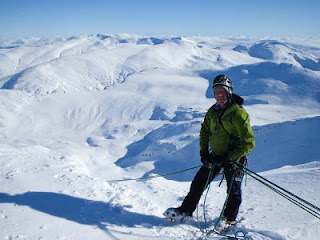 Sandy Allan on Aonach Mor. Schiehallion is the pointy peak on the horizon. 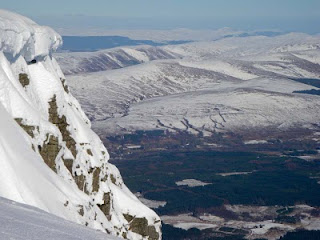 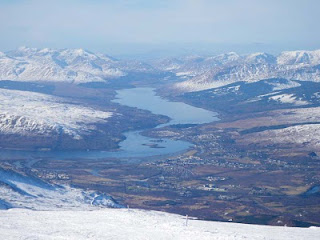 Posted by Andy Hyslop at 7:35 pm No comments: Links to this post

Email ThisBlogThis!Share to TwitterShare to FacebookShare to Pinterest
Labels: People

The sun is shining, the birds are singing and there's 4 foot of snow on the hill. What could be better?
Skied the ridge NW from Meall a Bhuachaillie to Craiggowrie then down to the forest track at Badaguish, and eventually back to Glenmore. Skis on all the way. There's lots of snow and wind slab on western slopes while east/north eastern facing slopes have been scoured to ice on the ridge. Still loads of snow low down.
There had obviously been lots of people out in the Glenmore area over the weekend and there were quite a few people out skiing and walking today. 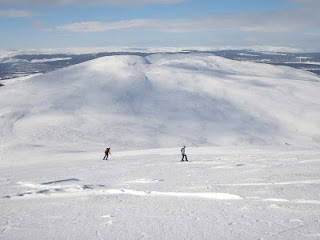 Posted by Andy Hyslop at 8:14 pm No comments: Links to this post