The good weather continues in the Cairngorms. I had (another) fantastic day skiing over to Bynack More via Ciste Mhearad and Allt a Choire Dhuibh.

As I’d never been down the east side of Cairngorm, I was slightly concerned about the grade ‘IV/Black Run’ status given to the descent in the SMC’s Ski Mountaineering guide. Could I get down a black with tele cable bindings and rather less than honed skills?

I consulted, Martin Dean who initially said that he couldn't remember any problems but followed it up by saying that he’d just looked at the map and couldn't remember anything about the crags. Fortunately I bumped into local skiing expert, Callum Scott in the ticket queue who said that I would be ok. I was reassured and ignored the fact that Callum had never actually seen me ski before.

It was minus 16’C when I left the house and it seemed extremely cold when I stepped out of the Ptarmigan Restaurant. After a couple of warm up runs I made my way over to the head Ciste Mhearad. I needn’t or worried. The snow was superb and the angle very steady, probably the kind of angle you would expect on a blue run.

I skinned up at The Saddle and headed up over A’Choinneach and across to the south ridge of Bynack More.

Descending to the col between Bynack More and Bynack Beg was steep at first but eased into the head of Allt a Choire Dhuibh. The 450M descent down the twisting stream bed to Strath Nethy was just amazing; beautiful scenery and perfect snow.

Skins back on again for the climb out onto the north ridge of Cairngorm. From here it is possible to glide back to the Ciste Car Park in 20 mins or so.

I’m not sure what time I left the lift system but I got the 9am train up and was back at the road by 12.50pm

Posted by Andy Hyslop at 9:02 pm No comments: Links to this post

Ice and Fire. Distant heather burning.
Had a day at Glenshee with Tele Master, Martin Dean.

I’ve never seen the Highlands looking so alpine. Blue skies, sparkling crystalline snow and no wind; it doesn’t get much better than this.

Glenshee was quiet after a week of half term madness. Skiing within the lift system was a good opportunity to work on technique but we were both longing for the isolation of the surrounding hills. 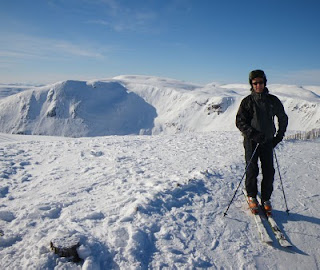 Posted by Andy Hyslop at 10:25 am No comments: Links to this post

Had an afternoon practicing telemarking at Cairngorm Mountain. I can more or less link an easy piste worth of wobbly turns with a fairly wide stance.

The eureka moment came when I spotted a young guy executing (what looked to me like) perfect tele’s at speed. I just had to talk to him; so I made an effort to get on the same T bar lift and rinse his brains for tele tips. What a nice bloke! (fortunately).

I’m really only writing this down so I don’t forget it.

Any other top tips from telemarkers out there gratefully received.

Posted by Andy Hyslop at 9:29 pm 2 comments: Links to this post

Skied up Geal Charn behind Dorback Lodge. Most of the snow has gone below 300m but vehicle tracks still have enough cover to be usable. I carried for about a kilometer at the start and the same on the way back which is acceptable for a 10K loop.

Total white-out on top; meaning no horizon and visibility down to a coupe of meters. I nearly turned back but an occasional fence post enticed me on until I was lucky enough to find some fresh tracks 50m from the summit cairn which also got me down the north ridge. Its amazing how any technique you thought you might have goes out the window in bad visibility and uncertain terrain.

The comforting sanctuary of a lone Scots Pine on the way back to Dorback Lodge. 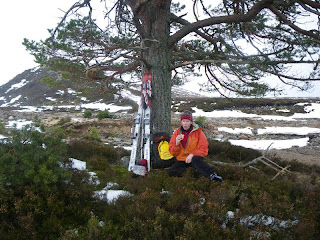 View Geal Charn in a larger map
Posted by Andy Hyslop at 5:41 pm No comments: Links to this post