BASOC are hosting one of three orienteering events over the weekend of 18th-19th September.

Aberlour 18/09/2010
Superb mix of woodland, parkland and and urban on a brand new map in an area brand new to orienteering. Starts from 10.30 am to 11.30am Park at Speyside High School www.moravianorienteering.org

Revack 19/09/2010
Coniferous forest near Grantown on Spy with plenty of features and challenging terrain. Starts from 10.30 am to 12.30am. Revack Estate signposted from A95 south of Grantown on Spey www.invoc.org.uk 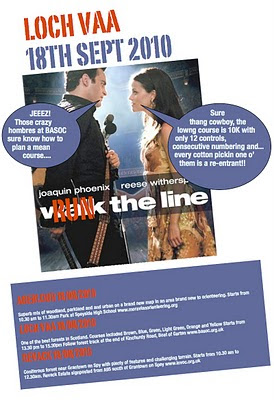 View September 2010 O Races in a larger map
Posted by Andy Hyslop at 1:43 pm No comments: Links to this post 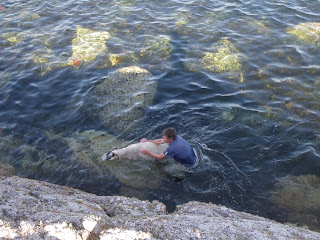 Had an incident with a sheep on a climbing trip to Mull last week. I was looking at some undeveloped cliffs on the Ross of Mull when I spooked a sheep sufficiently for it to attempt leaping across a deep inlet in the coast.

Inevitably, the sheep missed the opposite side of the gap and bounced back into the inlet with a sickening crunch. I couldn’t easily climb down but could lean over just enough to see the sheep stuck tight up against one of the side walls. It panicked when it saw me looking over the edge and started to struggle. Not really knowing what to do I decided to leave it for a bit in the hope that it might free itself.

We did a few routes on a nearby crag and worried about how the sheep might be fairing. I really didn’t want to get involved in dragging it out of the inlet but I’d never have been able to forgive myself if I’d just left it there to drown in the next high tide.

We returned after a couple of hours and tentatively peered over the edge. I couldn’t see the sheep at first and thought it had escaped but my heart dropped as I spotted it wedge in a horrible diagonal slot below the undercut wall of the inlet.

I climbed down to see what could be done. The sheep was wedge so securely it looked unlikely that I would be able to free it. After a lot of pulling I eventually managed to free its front end. The back end was difficult to free without twisting its spine and causing further injury but, like freeing a bit of climbing gear that had got stuck in a crack, I eventually worked out a sequence to free both ends at once.

The sheep was totally knackered and could hardly stand on its own. It had some abrasion injuries but nothing obviously broken. The problem now was how we were going to get it out of the inlet.

With Cynthia standing at the top of the inlet we discussed the options; dragging the sheep up the side wall on a rope or swimming out around the cliff base until the angled eased enough to get the sheep up onto dry land. I wasn’t overly keen about the swimming option, thinking about what potentially might go wrong being alone in the sea attached to a sheep! Cynthia didn’t help by questioning whether sheep could swim or not; something I hadn’t even considered but the thought of being dragged under by a non swimming sheep terrified me.

We tried the rope option. For this to work the sheep was going to have to make some attempt at scrambling up the steep wall with me pushing from behind. It quickly became clear that the sheep could hardly stand up never mind make an attempt at rock climbing. It would have to be the swimming route or nothing.

I coaxed the sheep towards the water. It was clearly not keen on launching off into deep water and we both stood there for a bit considering the lapping waves and swaying sea weed beds. I’d like to think that the sheep and I reached some kind of an understanding at this point, a kind of bonding in a common aim to escape the cliff ;-) The sheep took a few steps forward and seemed to accept its fate. We launched into the deep as one.

Yes, sheep can swim! (pretty bloody obvious really). The sheep spied an easy angled ramp leading out of the sea and we headed for that. It staggered and looked like it might fall back in but once on level ground it struggled across the boulders of the foreshore and eventually to the idyllic grassy meadows where it was munching contentedly until I came along.

Sheep don’t have much of a life, but I guess a steel bolt in the forehead is preferable to drowning while stuck in a rock cleft.
Posted by Andy Hyslop at 1:12 pm No comments: Links to this post