I had a first look at the coast east of Kintra a few weeks ago with Pete Whillance. We had an hour before driving to Craignuire and the ferry so didn’t have much time to explore but what we did see was very interesting. Cog told us that Danny Brooks had climbed several routes in the area but didn’t record them.

I returned two weeks later with John Topping. We found some more interesting crags and one very impressive overhanging buttress. I thought I could probably get up a line at the left side of the overhanging buttress but there was clearly scope for hard routes beyond our ability. Yan and Tess were in the area so we arranged to meet at the crag and point them at a few lines.

Tess onsighted a good looking corner line at HVS/E1 and Yan tried a line at the right side of the overhanging buttress but backed off due to loose blocks. In the mean time I cleaned the left-hand line; it was very steep and I had to nut down on the ab rope to stay in. The start looked like a tough boulder problem while the rest was continuously overhanging climbing in an impressive position.

Yan and Tess left John and I trying to boulder out the start. John eventually managed to reach the good holds but I was too tired after the cleaning and multiple jumar ascents to make much impression.

Yan led a new E3 in an inlet back towards Kintra. They had gone home the time we got back to the car but had left us a note. At least we had a route name now! 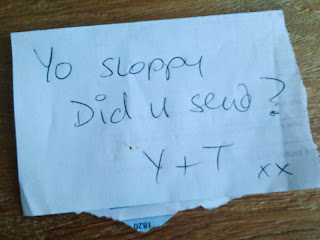 I’m not that interested in new routing as a rule especially when there’s lots of cleaning involved, and definitely when the climbing is too hard for me to onsight. However I was inspired by this line. The new crag was almost 30M. Overhanging granite with holds is a rarity, even more so with good gear. I could feel a mega classic coming on.

I arranged to meet bouldering ace, Greg Chapman at Craignuire on the 18th May. Greg had driven up from Lancaster with a car full of mats and I was hoping to utilise his superior technical know how, plus mats, to get me up the start of the route. We spent Saturday in the first inlet looking at some bouldering prospects. Greg climbed some fingery looking V10s while I cleaned another line to the right of Yan’s route. I ran out of energy on the first attempt but left the gear in place and came back the next day to climb the route clean, all be it with half the gear in place. Cynthia seconded and characteristically found a V Diff version to the 6a crux by climbing a hollow flake. I levered the flake off with Cogs ice axe to stop anyone else ruining my beautiful creation.

In the afternoon we all headed over to the big crag. Greg instantaneously dispatched the boulder problem start but had to modify his instructions to accommodate a lanky, weak, 53 year old. With the mats at the base I reached the good holds after a few tries and eventually managed to place a crucial blue Alien (Friend 0) that would protect the next section. Yet again I didn’t have the strength to continue and spent the rest of the afternoon on more cleaning and removing a huge flake from the niche with Cog’s ice axe.

I decided to rest on Monday and took Greg to some of the possible bouldering areas near Knock Vologan. Greg caught the bus back up to Craignuire that night but Cynthia stayed on to hopefully bag the route on Tuesday morning before heading home ourselves.

Following Greg’s advice, I warmed up well. I made the good hold on the second try and continued up for a couple of metres to where I could get a hand off and drop a loop so as to pull up the rest of rack. The climbing up to the niche wasn’t too hard  (F6a+) but I was seriously pumped after the boulder problem start (F6c+). After a good rest in the niche I pulled out right into the hanging chimney for a final ‘traditional’ struggle up to a spacious glacis belay (25M). A short VS pitch up the rib to finish making the whole route around 30M.

At last “Yo Sloppy” was in the bag, E4 6a, and even though I say so myself, its gotta be a three star mega classic ;-)


View Kintra - Some Bouldering Locations in a larger map
Posted by Andy Hyslop at 10:57 am 7 comments:

Email ThisBlogThis!Share to TwitterShare to FacebookShare to Pinterest
Labels: Climbing

Still plenty of snow up the hill.
Posted by Andy Hyslop at 8:25 pm No comments:

Having just got back from Eigg (see previous post), it was a bit of a rush to get everything together for an early start on Cairngorm 4000 tops.

I got up at 6.00 am and left the car park at 7.30 am fully prepared to skin up to the summit. Luckily I bumped into my anonymous mate at the bottom of the M1 tow who generously offered to give me a lift to the top. Purity and ethics out the window and enjoy the ride!

Macdui by 9.30 am and on to the top of the Taillear Burn. I was concerned that the headwall had obviously avalanched in a big way at some point in the last couple of days. There was a huge amount of debris but the snow pack seemed to have stablised since the weekend. Never the less I was anxious to get out of the danger zone as quickly as possible, particularly as I was alone.

The snow did not extend down to the Ghru necessitating a wade across the Dee and flog up Corie Odhar. I was lucky enough to bump into Graham Stein and Andy Lole on the plateau. We worked as a team on the second half of the tour which was useful in the heavy afternoon conditions.

The descent down Corie Gorm was still in excellent condition despite the heat. The snow ran out a short way above Lochan Odhar. Back at the car park for 6.30 pm.

Another incredible day in the Scottish hills.

Cog and Cynthia were heading to Eigg for the weekend. I’d never been so asked if I could come along. After a week of cold rain in Aviemore the weather cleared on Saturday morning to reveal an utterly plastered ‘Hill’; bright sun, no wind, powder and I’m heading west to a tick infested island. I was close to doing a U on the A9.

I kept driving and met Themselve’s at Lochailort. Cog took us to a nice sport crag on the coast near Arisaig. 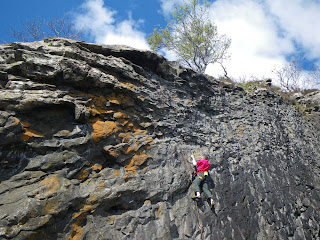 Nice looking crag but not extensive, covered in green lichen and too far to walk.

The next day we explored the cliffs on An Sgurr and did a new route on an unclimbed buttress at the east end of Ocean Wall. Once the loose stuff has been removed the rock is good with excellent friction. We climbed our route on-site; Cog removed what seemed like a skip load of blocks while seconding.


That evening a had a look at Poll nam Partan near the harbour and decided to clean a couple of lines before it got dark.

“ overgrown and guarded by steep muddy ground and bramble tangles”

I say, a quick access crag with some excellent looking lines and lots of potential for development. There is a road at the bottom and grass at the base (the right hand end at least).

It was raining on Monday morning but cleared enough for us to climb one of the lines before the boat left at 4.30pm. Fierce, well protected climbing using thin cracks and bridging; my kind of climbing.


I drove back east with the setting sun behind me. The hills looked incredible, still brown from the winter with every rock feature illuminated in the strong, low evening light. Cairngorm and Braeriach were still plastered and the 4000s were calling strong. (more on that soon)
Posted by Andy Hyslop at 9:29 am No comments: