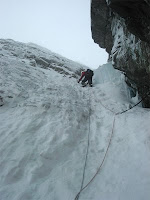 This was my first winter route for a few years and I was hoping to bag an easy classic with my old climbing friend, Jonathan Lagoe.

Unfortunately the route did not go as planned. With the wind blowing from the south the upper section of the gully filled with new snow on a hard surface and avalanched while we were on the second technical pitch. When it happened I was placing a screw just below an ice bulge.

I heard a deep rumble and everything went dark. Of course I knew what was happening but I continued to place the screw hoping that I could get it clipped before I was swept off. I was lucky to be standing below the ice bulge which meant the debri merely glanced the top of my helmet. 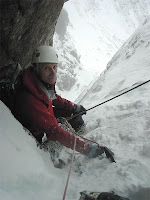 Despite a reactinary jerk on the rope from Jonathan as he assumed I was 'off' I continued to place the screw and clipped it just just as the avalanche ran out. Jonathan said later that all he could see of me during the avalanche was a hand frantically twisting an ice screw. In 34 years of winter climbing in Scotland and the Lakes that was my first experience of an avalanche.

Image: Jonathan at the stance after the avalanche

After some debate and analysis of why this had occurred despite the apparently benign conditions we decided to retreat on the basis that it would stupid to take the risk of a second avalanche happening while we were climbing the easy upper section of the gully. 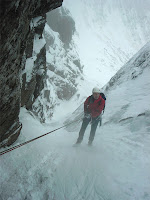 me realise what I have been missing over the last three years.

Some shots of the frozen loch below the crag: 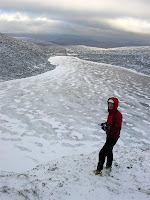 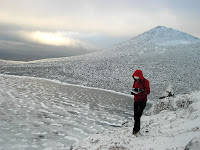 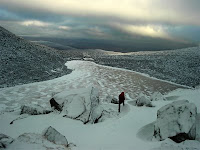 Posted by Andy Hyslop at 3:59 pm No comments: Links to this post

Email ThisBlogThis!Share to TwitterShare to FacebookShare to Pinterest
Labels: Climbing

I'm struggling to find the time to post at the moment but I am keeping my training log up to date at Attack Point
Posted by Andy Hyslop at 10:03 am No comments: Links to this post

After a few months lay off I had a fantastic weekend of orienteering at the Purple Thistle near Oban. Two excellent areas, quality courses and running reasonably well.