I’d been thinking about the possibility of a winter MTB Cairngorm circuit for some time. The summer version took over 16hrs. Would sub 24 hours be possible in winter?

Pre Christmas training rides to the pub convinced me that anything more than a light dusting of snow below 500M was going to require a multi day trip and, questionable reasoning for setting out on a bike rather than skis.

Getting the right conditions wasn’t going to be easy but the winter is mild and mainly brown. The problem with that would be strong winds, rain and the 9 significant river crossings. Also the mild weather generally followed a dump of snow which further fueled the rivers.

After weeks of Atlantic lows a ridge of high pressure started to build from Wednesday onwards. A weak front was depositing some snow just above 500M (max altitude of the circuit).

The forecast for Thursday/Friday looked good and I planned to leave at Midnight Thursday. By 6pm it had been sleeting in Aviemore for a couple of hours and the Drumochter Traffic Scotland web cam confirmed fresh snow below 500M; 24 hours delay.

I didn’t sleep well despite the reprieve. The next day was difficult, having to get psyched up all over again. The evening was cold and clear (-2C). I couldn’t sleep until 10.30pm and getting out of a warm bed less than an hour and half later then, stepping out into the freezing night, was horrible. A brief stop at Aviemore Station to mark time (00.20) and off into a cold clear moonlit night. Light headwind blowing. (14th Jan)

Steady away up the Tromie towards Gaick Lodge. The whole trip could have been stopped by 3 am if the Alt Gharbh Ghaig had been uncross-able; fortunately it was benign, as was the river crossing just before Loch an Dubh. However, a near stopper occurred shortly after while on the single track round the steep loch side. A rock hard avalanche cone covered the path with just the slightest icy break to teeter across in cycling shoes. A slip would have meant a 50M slide directly into the freezing loch.

Down past Stronphadruig Lodge to the A9, reaching Blair Atholl at 5.27 am. I’d left the car near the station the previous day. A quick brew, buttie , swap maps and pick up the spare battery then off again at 6.00 am. I estimated that it would take 2hrs to cycle up the Tilt to Falls of Tarf, which would give me daylight for the  vague open moor between the head of the Tilt and the Geldie Burn. The timing was right but the mist was down and it was difficult to get the best line. I made one unnecessary stream crossing. 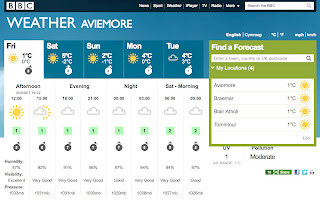 Crossing the wide Geldie Burn was possible but I wouldn’t have wanted much more water. The alternative is 6KM of heather bashing to get to Linn of Dee.

Braemar at 11.00 am and a stop at the excellent Old Bakery Cafe, leaving at 11.45 am. In summer the next section goes from Invercauld Bridge over to Loch Builg via the shoulder of Culardoch at 700M. I choose a winter alternative via Corndavaon Lodge; 5 miles further but 300M less climbing. Fast going on a good track to the loch then down Glen Avon on tarmac to Tomintoul at 15.50 pm.

By the time I left the Old Fire Station Cafe it was dark again. I couldn’t remember any route finding issues with the section over to Dorback Lodge but in the dark, without a moon and traveling in the opposite direction I made a couple of errors and ended up tramping across the moor to regain the line.

Over Eag Mhor and down to the Nethy ford; the deepest on the circuit which influenced my decision to go clockwise so as not to get an early soaking, (I think anti-clockwise would be faster in summer conditions). The descent from Ryvoan Bothy was too icy to ride. Pat met me at Glenmore and I gratefully latched onto her back wheel for a welcome (if rapid) tow back into Aviemore finishing at 20.45 pm with a total time of 20hrs and 25mins

The head-cam was disappointing. Most of the shots in the dark were unusable and the battery ran out by mid day. I've cobbled together some clips from December training around Aviemore and on the actual day.

A mild winter weather usually brings strong winds. River crossings would be dangerous or impossible. Anything but a light dusting of snow below 500M would be a serious problem. I was lucky to get a cold settled period following a mild spell which cleared the snow. 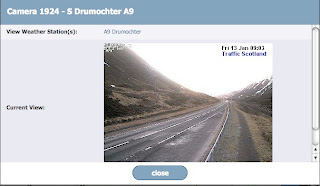 Trying to match a full moon with the above, and between the official winter dates of 21st December to 21st March is tricky. Going without a moon would be more a lot more difficult both for navigation and motivation.

Hands and feet are a big problem for winter biking. With 9 significant river crossings I needed a lightweight solution to keeping my feet warm and dry. Getting wet early on was not an option. In the end I came up with the idea of foldable waders; Pretty simple really, just two sections of silicone elastomer (tent fly sheet material) stitched together in a vague foot/leg shape and seam sealed with glue. They worked amazingly well even when partially holed towards the end.

Gloves - I started with a heavy pair of Mountain Hardwear Gauntlets but ditched them at Blair Atholl in favor of much lighter Sealskin insulated gloves. I carried backup polypro liners.

Shells - Altura cycling over trousers with fleece tights under. A Buffalo Super 6 shirt over a thin thermal. I carried a light-ish waterproof but never used it. I also had a light duvet Rab which again I never used but would have needed in the event of a puncture or any kind of mechanical, not to mention injury.

Lights - Petzl Tika XP on the helmet (only used off the bike). Petzl Ultra Torch 350 Lumens, bars mounted. I carried  2 x Accu 2 batteries but only used one on the lowest setting for the whole trip.

Bike - Merida 96er. A relatively light full suss - heavier than my Genesis bike but the rear suss paid dividends in the terrain.

Tyres - I did have the option of using snow spiker tyres but decided against it in the end which might have been a mistake considering how much ice there was on the tracks. Having said that the Continental X King 2.4s were great on everything else.

Luxuries - Ipod, GoPro head-cam. The head-cam was a waste of time at night.

Food - Cycling bottle with HighFive Energy and Zero (not at the same time). 2 butties, 2 Snickers, Power Flapjack. I didn’t eat much during stages which works fine for me providing I can get to a cafe every 3 or 4 hours. I carried the butties 120 miles to Glenmore before eating one.

Email ThisBlogThis!Share to TwitterShare to FacebookShare to Pinterest
Labels: Cycling