I’ve been waiting to ski the Cromdale Ridge for a few weeks now. Di Gilbert and friends did it between Christmas and New Year, it must have been very heavy going in deep snow; they did well to complete it. With a partial thaw, re-freeze and a light dusting, as well as a good forecast, it was clear that the day had come for me. 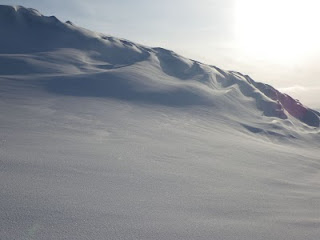 Wind blown fluting on the ridge

There’s nothing particularly spectacular about the ridge, but it is more or less continuous for 17KM and stands isolated by the river valleys of the Spey and Avon. 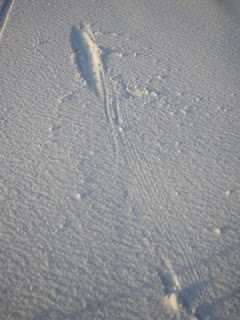 Hare tracks ending in suspicious looking claw scrapes and a pit. Raptor snack?
I like it. I like looking at the shape of the contours on the map and I like the fact that it is a bit boring. It’s not particularly isolated but I suspect you would rarely see anyone else up there. I certainly had it to myself today apart from more Arctic Hares than I’ve ever seen! 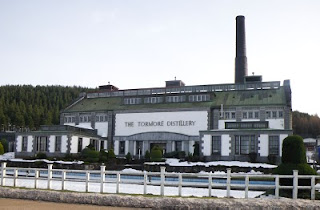 The opulent architecture of the Tormore Distillery

Talking of boring here are the technical details. Left the car near the junction of the Nethy Bridge/Tomintoul roads at 9am. Skied right into the back of the Tormore Distillery at 13.30pm. Got the bus back to Grantown followed by Taxi to retrieve the car.

I was using Nordic skis; Hagan X-Tace and Black Diamond Expedition poles. Drank 2 litres of High Five via a bladder and ate 2 cheese and chutney butties. The temperature started -5C rising to about -2C, (far to mush detail already).

View Skiing The Cromdale Ridge in a larger map
Posted by Andy Hyslop at 8:22 pm