I had a short run around some of the controls on this month’s Map of the Month. The marked course is 5.5K although I cut it short because I was feeling tired from a fairly intense period of racing over the last week or so.

This is only part of the Loch Vaa area. The forest to the west is currently out of bounds to protect Capercaillie nesting. A bit of an inconvenience I guess but the same restriction is also holding back a housing development on the edge of Boat of Garten, which would impact heavily on this world-class area.

New housing for local residents is a big issue on Speyside . Like most national parks the Cairngorm National Park has a problem with affordability of housing for people living and working in the area and the likely solutions will inevitably have an effect on the natural environment.

Link to an article in the Strathspey & Badenoch Herald about a proposed housing development near Aviemore. 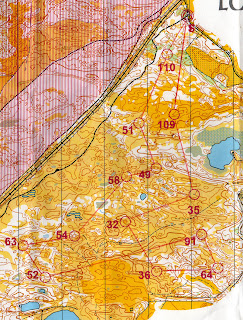