This weeks weather window was on Monday. I had a great day nordic touring from Cairnwell over to Invercauld Bridge. 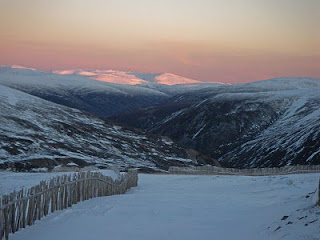 Sunrise on Ben Avon from he ski area

It would have been nice to continue to Lochnagar but the weather started to come in shortly after mid day and I was feeling pretty tired by then. 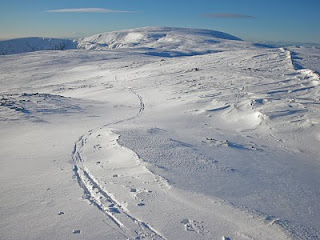 I descended from the plateau via The Feindallacher Burn which luckily, was full of wind blown powder. With my limited experience I would say conditions for nordic touring are excellent right now; a firm base with a thin skim of powder and minimal avalanche risk. 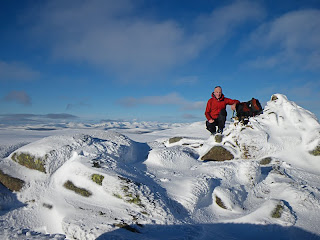 On the gear front, I bought a new pair of Fischer 109 Tour (waxing) skis. A huge improvement on the Hagan X Trace which are fine for going in a straight line but very difficult to turn. The 109’s seem like the perfect Scottish compromise for rapid touring on the plateaus with enough side cut and softness to make them usable on steep descents.

That’s not say that I now stay upright all the time or ski with any style what-so-ever, but I did manage to get down the White Lady using them today which opens up lots of possibilities for touring routes. 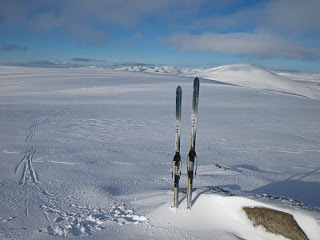 Also experienced waxing for the first time; seemed to work fine, just a bit of common sense about choosing the right wax for the snow temperatures. The skis run much faster than a crown base and don’t make an irritating buzzing noise.


View Cairnwell to Carn an t-Sagairt Mor in a larger map
Posted by Andy Hyslop at 6:04 pm