Got behind with my blog somewhat over the last couple of weeks. Here’s an update of events I have competed in since Buxton. 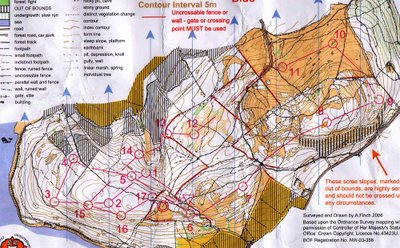 I work close to Arnside Knott and know it from lunchtime runs. It turned out to be an excellent orienteering area. I had a reasonably good run apart from making a couple of small errors on 4 and 5 – cost me about 2 mins. Peter Haines caught me up at 5 and we had a bit of a burn-up for the next few controls, which was great fun. 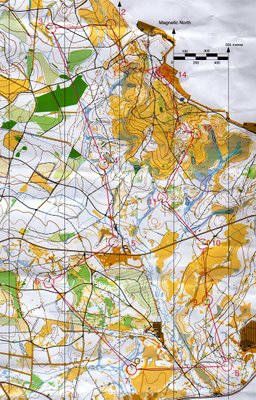 This was a Vets Interland selection event which is why I made the effort to drive to Southampton and back. I thought I might have an outside chance of getting a good result. Although I initially ran well I was caught out early by a pit in a vague flat area of bracken and clearings. In fact I had problems with every pit feature on the whole course which put me well out of the running and 10 mins down on the winner Michael Billinghurst. I guess having run in the area previously might have helped but really, I think I need to put this down to not remembering one of my O mantras: ‘Adapt your technique according to the terrain’ – I didn’t

An area of mixed forest, with complex moraine detail, in a beautiful setting. The courses were short to allow for the rough going in some parts of the area. Boulders slowed progress significantly in parts. I didn’t have a bad run but was unlucky to miss a small re-entrant towards the end, which cost me 4 mins. A couple of other sloppy errors put me 6 mins down on Martin and 3 mins down on Donald.

A link to the map on Martin’s site

I was pretty daunted by the prospect of running in an unfamiliar area at night so decided to go for a super safe and steady approach. It paid off because I won! Although there weren’t many people running M45 there were some good runners including Martin Dean. Talking to Martin the next day he said that his approach was to go fast because the course was so short but unfortunately he made some costly errors.

A link to the map on Martin’s site
Posted by Andy Hyslop at 12:00 pm

Good to see your post and maps from recent events you've been to.

Was very impressed with you time at the Scottish Nights! Could see how you lost time at the reentrant at Cambus o'May - presumably control 17 - which was small and in a vague area.

Arnside Knott looked like a good area - will copy your map and go for a run there next time I'm in the Lakes.

Won't be at the Tim Watkins Trophy on Sunday - I'm organising the FVO Club Champs tomorrow, have the FVO dinner dance tomorrow night and a colour coded event near Drumochter on Sunday. Look forward to seeing your map from it - have a good one!